The first step is to update and upgrade any existing packages:

These optimization libraries are especially important for resource constrained devices such as the Raspberry Pi.

Lastly, let’s install both the Python 2.7 and Python 3 header files so we can compile OpenCV with Python bindings:

If you’re working with a fresh install of the OS, it is possible that these versions of Python are already at the newest version (you’ll see a terminal message stating this).

If you skip this step, you may notice an error related to the Python.h header file not being found when running make to compile OpenCV.

Now that we have our dependencies installed, let’s grab the 3.3.0 archive of OpenCV from the official OpenCV repository.. This version includes the dnn  module which we discussed in a previous post where we did Deep Learning with OpenCV (Note: As future versions of openCV are released, you can replace 3.3.0 with the latest version number):

cd ~
wget –O opencv.zip https://github.com/Itseez/opencv/archive/3.3.0.zip
unzip opencv.zip
We’ll want the full install of OpenCV 3 .so we also need to grab the opencv_contrib repository as well:
wget –O opencv_contrib.zip https://github.com/Itseez/opencv_contrib/archive/3.3.0.zip
unzip opencv_contrib.zip
Note: Make sure your opencv and opencv_contrib versions are the same (in this case,3.3.0). If the versions numbers do not match up, then you’ll likely run into either compile-time or runtime errors.
Before we can start compiling OpenCV on our Raspberry Pi 3, we first need to install pip , a Python package manager:
wget –no-check-certificate https://bootstrap.pypa.io/get–pip.py
sudo python get–pip.py

We are now ready to compile and install OpenCV!

cd ~/opencv–3.3.0/
mkdir build
cd build
sudo  cmake –D CMAKE_BUILD_TYPE=RELEASE  –D CMAKE_INSTALL_PREFIX=/usr/local  –D INSTALL_PYTHON_EXAMPLES=ON \
–D OPENCV_EXTRA_MODULES_PATH=~/opencv_contrib–3.3.0/modules  –D BUILD_EXAMPLES=ON ..
Now, before we move on to the actual compilation step, make sure you examine the output of CMake!
Start by scrolling down the section titled Python 2 and Python 3 .
If you are compiling OpenCV 3 for Python 2.7, then make sure your Python 2 section includes valid paths to the Interpreter , Libraries , numpy and packages path , similar to my screenshot below: 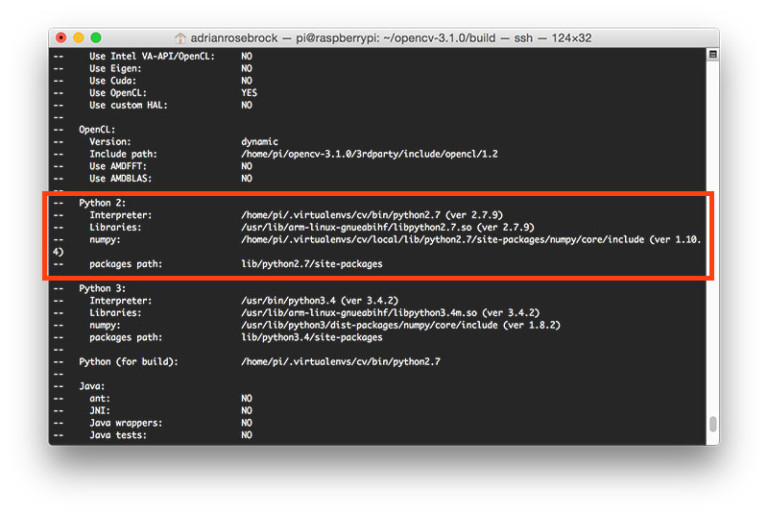 Notice how the Interpreter points to our python2.7 binary located in the cv virtual environment. The numpy variable also points to the NumPy installation in the cvenvironment.

Similarly, if you’re compiling OpenCV for Python 3, make sure the Python 3 section looks like the figure below: 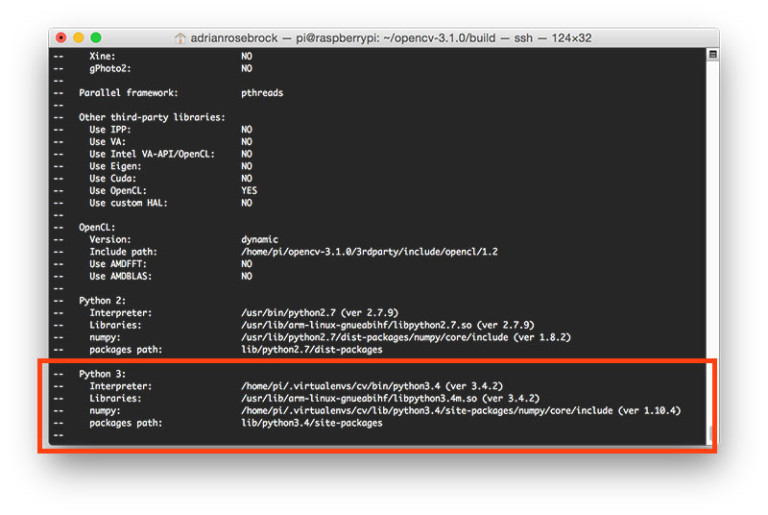 The –j4  command controls the number of cores to leverage when compiling OpenCV 3. The Raspberry Pi 3 has four cores, thus we supply a value of 4  to allow OpenCV to compile faster.

However, due to race conditions, there are times when make  errors out when using multiple cores. If this happens to you, I suggest starting the compilation over again and using only onecore:

make clean
make
From there, all you need to do is install OpenCV 3 on your Raspberry Pi 3:
sudo make install
sudo ldconfig

We’re almost done — just a few more steps to go and you’ll be ready to use your Raspberry Pi 3 with OpenCV 3.

Provided your Step #3 finished without error, OpenCV should now be installed in/usr/local/lib/python2.7/site–pacakges . You can verify this using the ls  command:

After running make install , your OpenCV + Python bindings should be installed in/usr/local/lib/python3.4/site–packages . Again, you can verify this with the ls  command:

Congratulations, you now have OpenCV 3 installed on your Raspberry Pi 3 running Raspbian Jessie!

But before we pop the champagne and get drunk on our victory, let’s first verify that your OpenCV installation is working properly.