In this lesson we will learn how a Hall Effect Sensor Module works and how to use it with the Board for detecting magnetic. 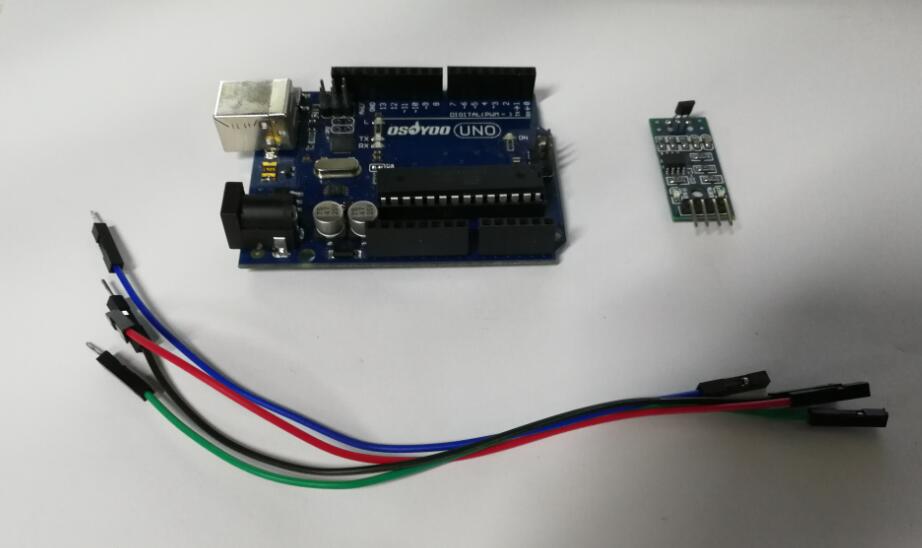 As these electrons and holes move side wards a potential difference is produced between the two sides of the semiconductor material by the build-up of these charge carriers. Then the movement of electrons through the semiconductor material is affected by the presence of an external magnetic field which is at right angles to it and this effect is greater in a flat rectangular shaped material.

The effect of generating a measurable voltage by using a magnetic field is called the Hall Effect after Edwin Hall who discovered it back in the 1870’s with the basic physical principle underlying the Hall effect being Lorentz force. To generate a potential difference across the device the magnetic flux lines must be perpendicular, (90o) to the flow of current and be of the correct polarity, generally a south pole.

The output voltage, called the Hall voltage, (VH) of the basic Hall Element is directly proportional to the strength of the magnetic field passing through the semiconductor material (output ∝ H). This output voltage can be quite small, only a few microvolts even when subjected to strong magnetic fields so most commercially available Hall effect devices are manufactured with built-in DC amplifiers, logic switching circuits and voltage regulators to improve the sensors sensitivity, hysteresis and output voltage. This also allows the Hall effect sensor to operate over a wider range of power supplies and magnetic field conditions.

Hall Effect Sensors are available with either linear or digital outputs. The output signal for linear (analogue) sensors is taken directly from the output of the operational amplifier with the output voltage being directly proportional to the magnetic field passing through the Hall sensor. This output Hall voltage is given as:

Digital output sensors on the other hand have a Schmitt-trigger with built in hysteresis connected to the op-amp. When the magnetic flux passing through the Hall sensor exceeds a pre-set value the output from the device switches quickly between its “OFF” condition to an “ON” condition without any type of contact bounce. This built-in hysteresis eliminates any oscillation of the output signal as the sensor moves in and out of the magnetic field. Then digital output sensors have just two states, “ON” and “OFF”.

Most Hall effect devices can not directly switch large electrical loads as their output drive capabilities are very small around 10 to 20mA. For large current loads an open-collector (current sinking) NPN Transistor is added to the output.

This transistor operates in its saturated region as a NPN sink switch which shorts the output terminal to ground whenever the applied flux density is higher than that of the “ON” pre-set point.

The output switching transistor can be either an open emitter transistor, open collector transistor configuration or both providing a push-pull output type configuration that can sink enough current to directly drive many loads, including relays, motors, LEDs, and lamps.

Hall effect sensors are activated by a magnetic field and in many applications the device can be operated by a single permanent magnet attached to a moving shaft or device. There are many different types of magnet movements, such as “Head-on”, “Sideways”, “Push-pull” or “Push-push” etc sensing movements. Which every type of configuration is used, to ensure maximum sensitivity the magnetic lines of flux must always be perpendicular to the sensing area of the device and must be of the correct polarity.

Also to ensure linearity, high field strength magnets are required that produce a large change in field strength for the required movement. There are several possible paths of motion for detecting a magnetic field, and below are two of the more common sensing configurations using a single magnet: Head-on Detection and Sideways Detection.

As its name implies, “head-on detection” requires that the magnetic field is perpendicular to the hall effect sensing device and that for detection, it approaches the sensor straight on towards the active face. A sort of “head-on” approach.

Linear devices can also differentiate between positive and negative magnetic fields. Non-linear devices can be made to trigger the output “ON” at a pre-set air gap distance away from the magnet for indicating positional detection.

The second sensing configuration is “sideways detection”. This requires moving the magnet across the face of the Hall effect element in a sideways motion.

Sideways or slide-by detection is useful for detecting the presence of a magnetic field as it moves across the face of the Hall element within a fixed air gap distance for example, counting rotational magnets or the speed of rotation of motors.

Depending upon the position of the magnetic field as it passes by the zero field centre line of the sensor, a linear output voltage representing both a positive and a negative output can be produced. This allows for directional movement detection which can be vertical as well as horizontal.

There are many different applications for Hall Effect Sensors especially as proximity sensors. They can be used instead of optical and light sensors were the environmental conditions consist of water, vibration, dirt or oil such as in automotive applications. Hall effect devices can also be used for current sensing.

We know from the previous tutorials that when a current passes through a conductor, a circular electromagnetic field is produced around it. By placing the Hall sensor next to the conductor, electrical currents from a few milliamps into thousands of amperes can be measured from the generated magnetic field without the need of large or expensive transformers and coils.

As well as detecting the presence or absence of magnets and magnetic fields, Hall effect sensors can also be used to detect ferromagnetic materials such as iron and steel by placing a small permanent “biasing” magnet behind the active area of the device. The sensor now sits in a permanent and static magnetic field, and any change or disturbance to this magnetic field by the introduction of a ferrous material will be detected with sensitivities as low as mV/G possible.

There are many different ways to interface Hall effect sensors to electrical and electronic circuits depending upon the type of device, whether digital or linear. One very simple and easy to construct example is using a Light Emitting Diode as shown below.

This head-on positional detector will be “OFF” when there is no magnetic field present, (0 gauss). When the permanent magnets south pole (positive gauss) is moved perpendicular towards the active area of the Hall effect sensor the device turns “ON” and lights the LED. Once switched “ON” the Hall effect sensor stays “ON”.

To turn the device and therefore the LED “OFF” the magnetic field must be reduced to below the release point for unipolar sensors or exposed to a magnetic north pole (negative gauss) for bipolar sensors. The LED can be replaced with a larger power transistor if the output of the Hall Effect Sensor is required to switch larger current loads.

In this example, we are going to use a hall effect sensor module to turn the Osoyoo UNO’s built-in led on and off with a magnet.

Open the Serial Monitor you will see the analog value and the digital value as below: 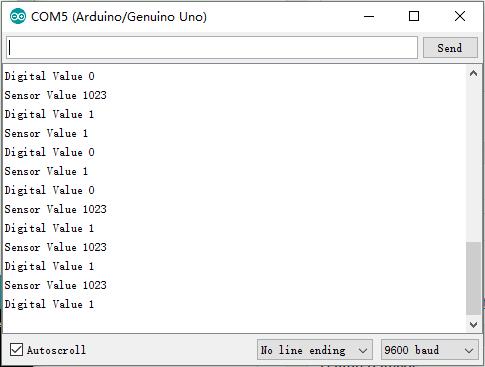