In previous lesson Introduction Of Raspberry Pi GPIO , we learned what is GPIO pins ,GPIO naming and location map in Raspberry Pi. Now we start to learn how to program GPIO pins and control outside device through GPIO.

If you want to use Raspberry Pi to control other devices such as sensors, motors, LEDs etc, you need to exchange signal with these devices. This is called Input/Output(I/O). That is the job of GPIO pins.

There are many free Open source GPIO libraries in the Internet. In this lesson, we will teach you how to install “wiringPi” library which is very popular among  C programmers.

We don’t want to talk much of the technical detail about wiringPi. If you want to get more wiringPi information , please read  following link:

Test wiringPi exist or not

If the message appears in your terminal, the wiringPi is installed in your Pi.

If the message appears as follow, the wiringPi has not been installed yet.

After installation wirngPi, you can test a project with LED on your raspberry Pi via wiringPi.

1) Experimental Principle
Connect LED with raspberry Pi GPIO, and then the program output high or low level to this GPIO to control the LED blink.

Add wiringPi and stdio file which is used in this project at the beginning of the code. the LED connect with wPi#0 (physical pin#11 or GPIO/BCM 17). There are three ways of naming including physical, wiringPi and BCM. To learn more information about raspberry Pi GPIO, please visit: https://osoyoo.com/2017/06/26/raspberry-pi-basic-tutorial-introduction-of-raspberry-pi-gpio/. You can enter the following command to see the GPIO layout

If you want use BCM pin number system, you need add following statement:

Explanation: C language is high level language. Before running the project, the code need to compile as an executable file.
gcc: is GNU Compiler Collection. If you want to write your own C code and compile to run it, you need to master gcc.
-Wall: to get more error when compile the code
-o: to name the compiled file. You can name the file as your like. here we name as app
testwiringpi.c: means the original file which is compiled
-lwiringPi: is to load the library wiringPi (l is short for library)

4)Run Project, enter the following command and press “enter” to run the project 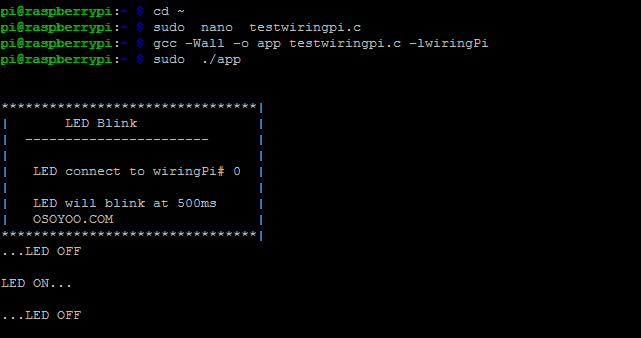 5)After running the code, your terminal will show print message as codef firstly, and then the LED blink and the ternimal will show LED status. 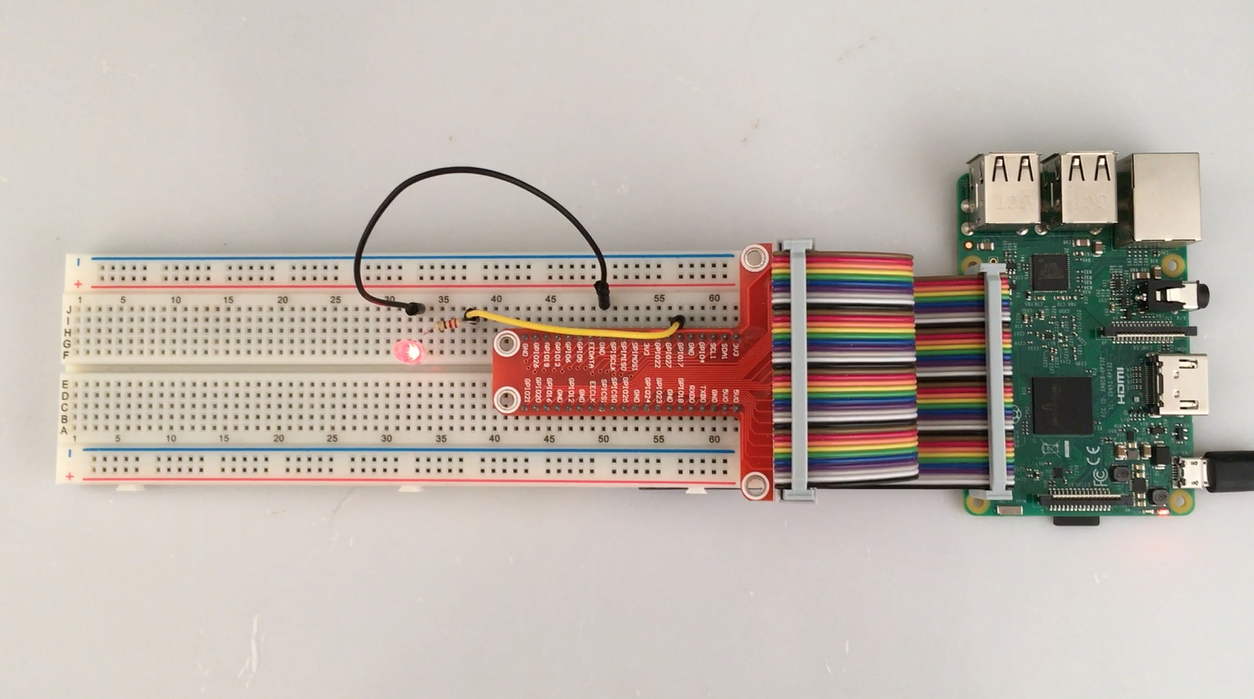 6)You can also use Python to do the same job.