ESP8266-Based Serial WiFi Shield for Arduino is designed and developed by Shenzhen Doctors of Intelligence & Technology (SZDOIT). The shield is designed based on esp8266 by Espressif Systems, pin-compatible with Arduino UNO/Mega2560 DevBorad.

The serial wifi shield has the following features:

2, Shield is pin-compatible with Arduino Uno, Mega2560 and other control board. A voltage converter chip is used to deal with 3.3V (Esp8266) and 5V (Arduino);

3, Dual DIP switches is used for serial ports so that this module shield can be used alone as an Arduino Uno expansion board, and also be used as ESP8266 expansion board;

4, Serial data is transported to WiFi device transparently, and vice versa. Arduino program does not need any configuration;

6, The module shield can be used as an independent ESP8266 development board. for instance, downloading the official AT commands firmware, NodeMCU open source firmware can be used;

7, The module shield also can be used as stand-alone expansion board for Arduino Uno. This serial WiFi module board provides interface as shown in PCB view. And each pin functions are silk-printed in circuit board, as follows: 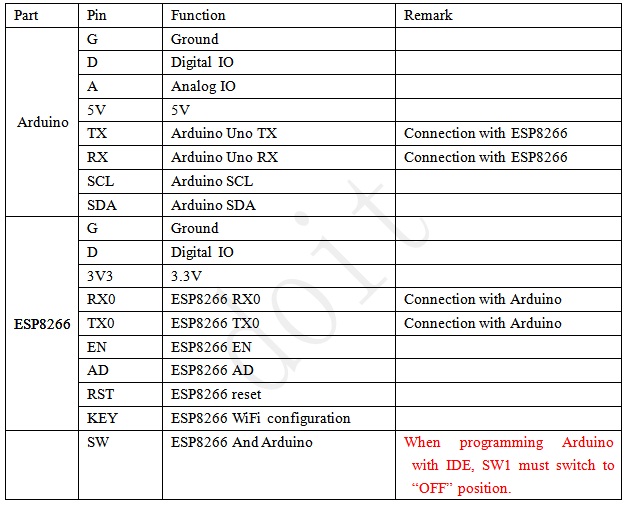 ESP8266-Based serial WiFi Shield has two LEDs. Red color LED is donated to power supply. Blue LED is a multi-functional LED, and its function is described as follows: