PID control and PID algorithms are a complicated topic that are a bit difficult to understand. I’m going to try to explain it as it relates to the robot I just did and hopefully it will give you a general idea of what a PID algorithm is and why it is used.

To start off, some definitions. First, an algorithm for our purposes can be defined as a step-by-step procedure for solving a problem or accomplishing some end especially by a computer. The end we want to accomplish is making a robot balance on two wheels, and the PID part is a type of algorithm that follows certain steps in order to make that happen. Next, PID stands for Proportional-Integral-Derivative. The integral and derivative part are related to calculus, but if you haven’t taken calculus you  can still understand and use PID controllers.

If you Google PID algorithms you usually turn up some funky looking diagrams like this:

From left to right: 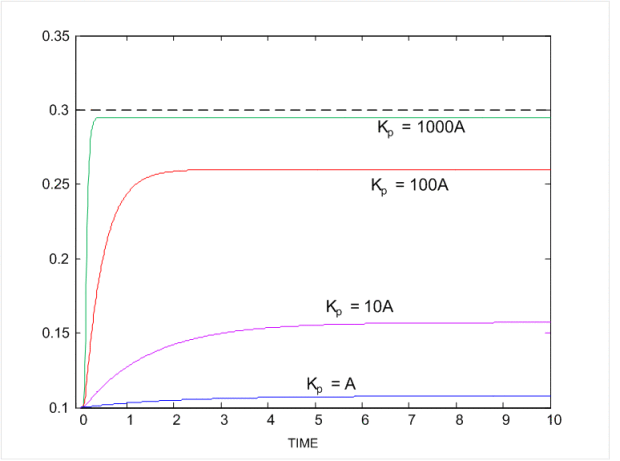 So A is e(t), and the value before A is the Kp value. You can see that larger values of Kp help the system achieve stability faster. However, you can overdo it. Too much Kp will give severe oscillations, as seen here: 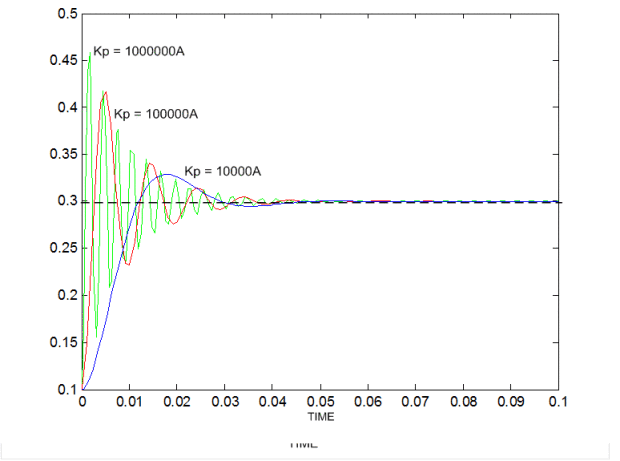 Note that these Kp values are NOT recommended values for your robot, they are general values only to illustrate a point. My actual Kp value for the balancing robot was 40. Less than that gave a sluggish robot that oscillated wildly, while more than that was too aggressive an approach (like the 100000A example above). The original Franko robot had a value of 70. It all depends on the robot, even two robots that have the same purpose.

What that means is that robots are only as accurate as you program them to be, and as accurate as their motors are. Without going into detail, just because you program the robot to turn a wheel a certain amount doesn’t mean it will turn that exact amount. Usually it will be a little off (due to friction, motor deadzones, power losses, etc.). The integral term (Ki) takes this error and adds it up until it is large enough to make a difference.

This can have negative consequences if the Ki error is too large though, as shown here: 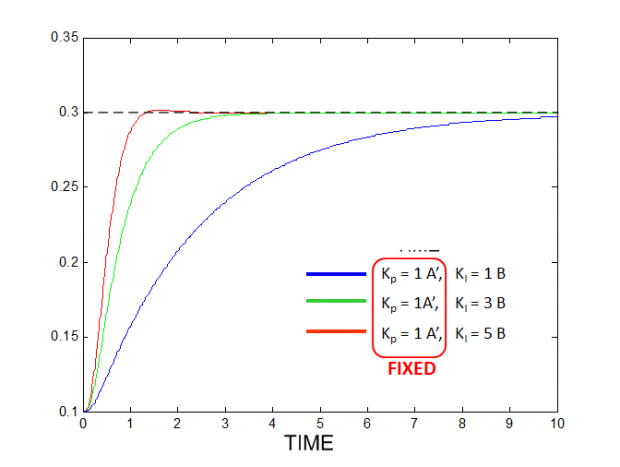 In this graph, B is e(t) and the number before B is Ki. For the balancing robot, a large Ki will enable it to steady itself very quickly, and will help eliminate drift. If you look up videos of balancing robots on YouTube you will see that a lot of them will roll around. That is because of their steady state error, and a larger Ki will stop that (as long as it’s not too large). Mine was set at 500, which is over 7 times greater than the Kp value.

Finally is the Kd term. With the derivative term, the controller output is proportional to the rate of change of the measurement or error. The derivative term slows the rate of change of the controller output, most notably near the controller set value. It therefore reduces the magnitude of the overshoot produced by the integral component and improves stability. Larger Kd values decrease overshoot, but slows down transient response and may lead to instability from signal noise amplification from differentiation of the error.

To translate, the Kd term helps the Kp term not overshoot the mark and reduces oscillations. Too large of a Kd term will slow down the response of the robot and make it slower to balance, while too small of a Kd term will make it shake a lot. Mine was set at 1.9, so much smaller than either the Kp or Ki terms.

Also I was using the auto tune function of the PID library, and so I do not know the actual final values of the 3 constants. The way I set them got me good enough results so that the auto tune could “fix” them and get the robot to balance well. Some more trial and error without the auto tune will be necessary to get good performance without the warm-up jitters that are shown in the video posted previously.

Note that all of the “engineer” talk and the graphs came from a presentation from my college instrumentation course that I am unable to link to because it is behind a username/password sign in.

Obviously PID algorithms are complex and are different for each robot you will build. Hopefully this brief overview gives some insight into how one goes about constructing a PID algorithm.