In this lesson, we will use a potentiometer module to control the light brightness of   LED module . Both modules are connected to Osoyoo Magic I/O board for Arduino. 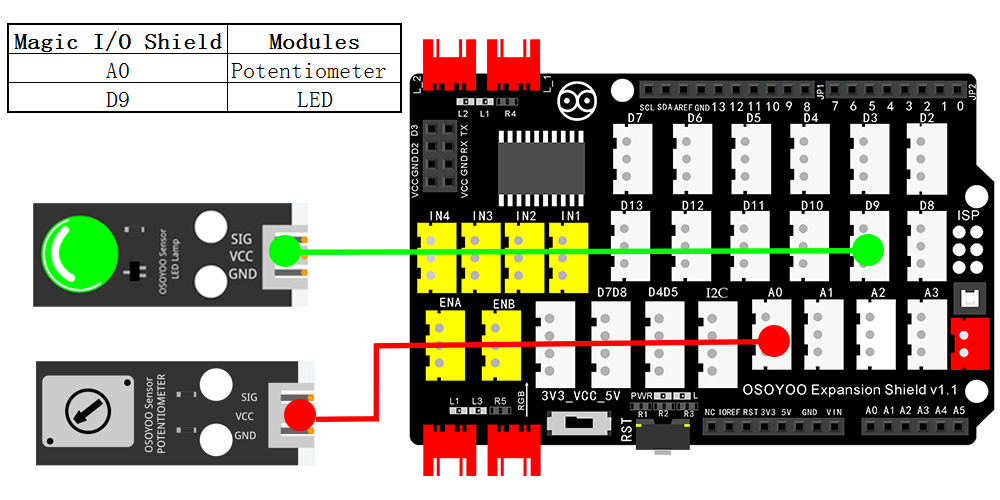 Connect the OSOYOO Basic Board for Arduino to your computer using the USB cable. The green power LED (labelled PWR) should go on.

In this example, let’s see how to use potentiometer to change the luminance of an LED and receive the data of the potentiometer in Serial Monitor to see its value change. The potentiometer’s value is sent by the analog pin A0 to variable InputValue. Set the following blocks to print ”Input:” and the InputValue, then jump to the next line automatically. Convert the value from 0-1023 proportionally to that in the range 0-255, and assign it to OutputValue. Drag another AnalogWrite block from In/Out section, Set pin 9 as output, and add a Delay for 1 second. Click Save after programming is done. Select the board type and serial port before uploading. For instause a Uno board, just select Arduino/Genuino Uno.

Next,upload the code. If the uploading fails, check and correct the code according to the prompts.Finally, the status will change to ‘Upload success!’.