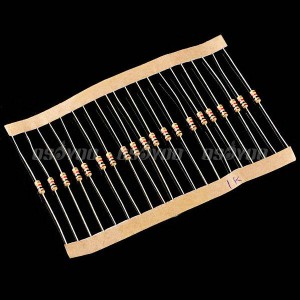 A resistor is a two-terminal electrical or electronic component that resists the flow of current, producing a voltage drop between its terminals in accordance with Ohm’s law.

The electrical resistance is equal to the voltage drop across the resistor divided by the current that is flowing through the resistor.

The SI unit of electrical resistance is the ohm. A component has a resistance of 1 ohm if a voltage of 1 volt across the component results in a current of 1 ampere, or amp, which is equivalent to a flow of one coulomb of electrical charge (approximately 6.241506 × 1018 electrons) per second. The multiples kilohm (1000 ohms) and megaohm (1 million ohms) are also commonly used.

In an ideal resistor, the resistance remains constant regardless of the applied voltage or current flowing through the device or the rate of change of the current. While real resistors cannot attain this goal, they are designed to present little variation in electrical resistance when subjected to these changes, or to changing temperature and other environmental factors.

A resistor has a maximum working voltage and current above which the resistance may change (drastically, in some cases) or the resistor may be physically damaged (overheat or burn up, for instance). Although some resistors have specified voltage and current ratings, most are rated with a maximum power which is determined by the physical size. Common power ratings for carbon composition and metal-film resistors are 1/8 watt, 1/4 watt, and 1/2 watt. Metal-film and carbon film resistors are more stable than carbon resistors against temperature changes and age. Larger resistors are able to dissipate more heat because of their larger surface area. Wire-wound and resistors embedded in sand (ceramic) are used when a high power rating is required.

Furthermore, all real resistors also introduce some inductance and a small amount of capacitance, which change the dynamic behavior of the resistor from the ideal.

Some resistors are cylindrical, with the actual resistive material in the centre (composition resistors, now obsolete) or on the surface of the cylinder (film) resistors, and a conducting metal lead projecting along the axis of the cylinder at each end(axial lead). There are carbon film and metal film resistors. The photo above right shows a row of common resistors. Power resistors come in larger packages designed to dissipate heat efficiently. At high power levels, resistors tend to be wire wound types. Resistors used in computers and other devices are typically much smaller, often in surface-mount packages without wire leads. Resistors are built into integrated circuits as part of the fabrication process, using the semiconductor as the resistor. Most often the IC will use a transistor-transistor configuration or resistor-transistor configuration to obtain results. Resistors made with semiconductor material are more difficult to fabricate and take up too much valuable chip area.

Variable resistors can sometimes be unreliable, because the wire or metal can corrode or wear. Some modern variable resistors use plastic materials that do not corrode and have better wear characteristics.

Other types of resistors

Most axial resistors use a pattern of coloured stripes to indicate resistance. SMT ones follow a numerical pattern. Cases are usually brown, blue, or green, though other colours are occasionally found like dark red or dark gray.

4 band identification is the most commonly used colour coding scheme on all resistors. It consists of four coloured bands that are painted around the body of the resistor. The scheme is simple: The first two numbers are the first two significant digits of the resistance value, the third is a multiplier, and the fourth is the tolerance of the value. Each colour corresponds to a certain number, shown in the chart below. The tolerance for a 4-band resistor will be 2%, 5%, or 10%.

The Standard EIA Color Code Table per EIA-RS-279 is as follows:

Note: red to violet are the colours of the rainbow where red is low energy and violet is higher energy.

Resistors use specific values, which are determined by their tolerance. These values repeat for every exponent; 6.8, 68, 680, etc. This is useful because the digits, and hence the first two or three stripes, will always be similar patterns of colours, which make them easier to recognize.

Standard resistors are manufactured in values from a few milliohms to about a gigohm; only a limited range of values called preferred values are available. In practice, the discrete component sold as a “resistor” is not a perfect resistance, as defined above. Resistors are often marked with their tolerance (maximum expected variation from the marked resistance). On color coded[] resistors the color of the rightmost band denotes the tolerance:

5-band identification is used for higher tolerance resistors (1%, 0.5%, 0.25%, 0.1%), to notate the extra digit. The first three bands represent the significant digits, the fourth is the multiplier, and the fifth is the tolerance. 5-band standard tolerance resistors are sometimes encountered, generally on older or specialized resistors. They can be identified by noting a standard tolerance color in the 4th band. The 5th band in this case is the temperature coefficient.

. Precision SMT resistors are marked with a four-digit code in which the first three digits are the first three significant digits of the value and the fourth digit is the power of ten.

The relationship between voltage, current, and resistance through an object is given by a simple equation which is called Ohm’s Law:

where V is the voltage across the object in volts (in Europe, U), I is the current through the object in amperes, and R is the resistance in ohms. (In fact this is only a simplification of the original Ohm’s law – see the article on that law for further details.) If V and I have a linear relationship — that is, R is constant — along a range of values, the material of the object is said to be ohmic over that range. An ideal resistor has a fixed resistance across all frequencies and amplitudes of voltage or current.

Superconducting materials at very low temperatures have zero resistance. Insulators (such as air, diamond, or other non-conducting materials) may have extremely high (but not infinite) resistance, but break down and admit a larger flow of current under sufficiently high voltage.

The power dissipated by a resistor is the voltage across the resistor times the current through the resistor:

All three equations are equivalent, the last two being derived from the first by Ohm’s Law.

The total amount of heat energy released is the integral of the power over time:

If the average power dissipated exceeds the power rating of the resistor, then the resistor will first depart from its nominal resistance, and will then be destroyed by overheating.

Resistors in a parallel configuration each have the same potential difference (voltage). To find their total equivalent resistance (Req):

The parallel property can be represented in equations by two vertical lines “||” (as in geometry) to simplify equations. For two resistors,

The current through resistors in series stays the same, but the voltage across each resistor can be different. The sum of the potential differences (voltage) is equal to the total voltage. To find their total resistance:

A resistor network that is a combination of parallel and series can sometimes be broken up into smaller parts that are either one or the other. For instance,

However, many resistor networks cannot be split up in this way. Consider a cube, each edge of which has been replaced by a resistor. For example, determining the resistance between two opposite vertices requires matrix methods for the general case. However, if all twelve resistors are equal, the corner-to-corner resistance is 5/6 of any one of them.

Resistors are commonly made by winding a metal wire around a ceramic, plastic, or fiberglass core. The ends of the wire are soldered to two caps, attached to the ends of the core. The assembly is protected with a layer of paint, molded plastic, or an enamel coating baked at high temperature. The wire leads are usually between 0.6 and 0.8 mm in diameter and tinned for ease of soldering.

Foil resistors have had the best precision and stability ever since they were introduced in 1958 by Berahard F. Telkamp. One of the important parameters influencing stability is the temperature coefficient of resistance (TCR). Although the TCR of foil resistors is considered extremely low, this characteristic has been further refined over the years.