In this lesson, we will show how to use OSOYOO Basic Board for Arduino to control an active buzzer module and make beep alarm.

Buzzers, which are supplied by DC power, are widely used in computers, printers, photocopiers, alarms, electronic toys, automotive electronic devices, telephones, timers and other electronic products as sound devices. Buzzers can be categorized as active and passive ones (see the following picture). Turn the pins of two buzzers face up, and the one with a green circuit board is a passive buzzer, while the other enclosed with a black tape is an active one.

The difference between an active buzzer and a passive buzzer is:

In this lesson, we use an active buzzer.

Note: As the sound frequency  is decided by the build-in oscillator circuit, you can not change the frequency of the beep by software.

Please plug OSOYOO magic I/O board onto UNO board First. Then  connect buzzer module to Port D12 in Osoyoo Magic I/O board with a 3-pin PNP cable.   Circuit connection picture as below: 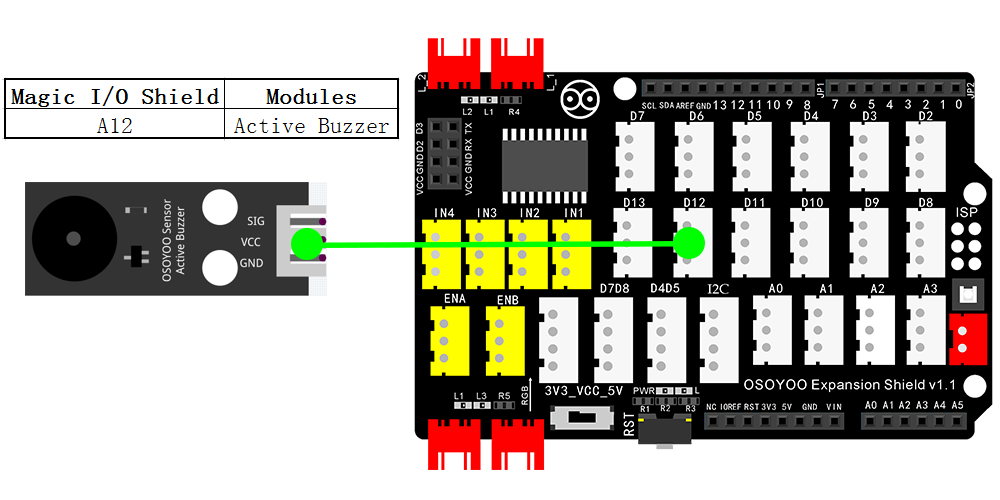 After above operations are completed, connect the OSOYOO Basic Board for Arduino to your computer using the USB cable. The green power LED (labelled PWR) should go on.Open the Graphical Programming software Mixly and follow the next operations,this lesson is very similar to the LED lessons. 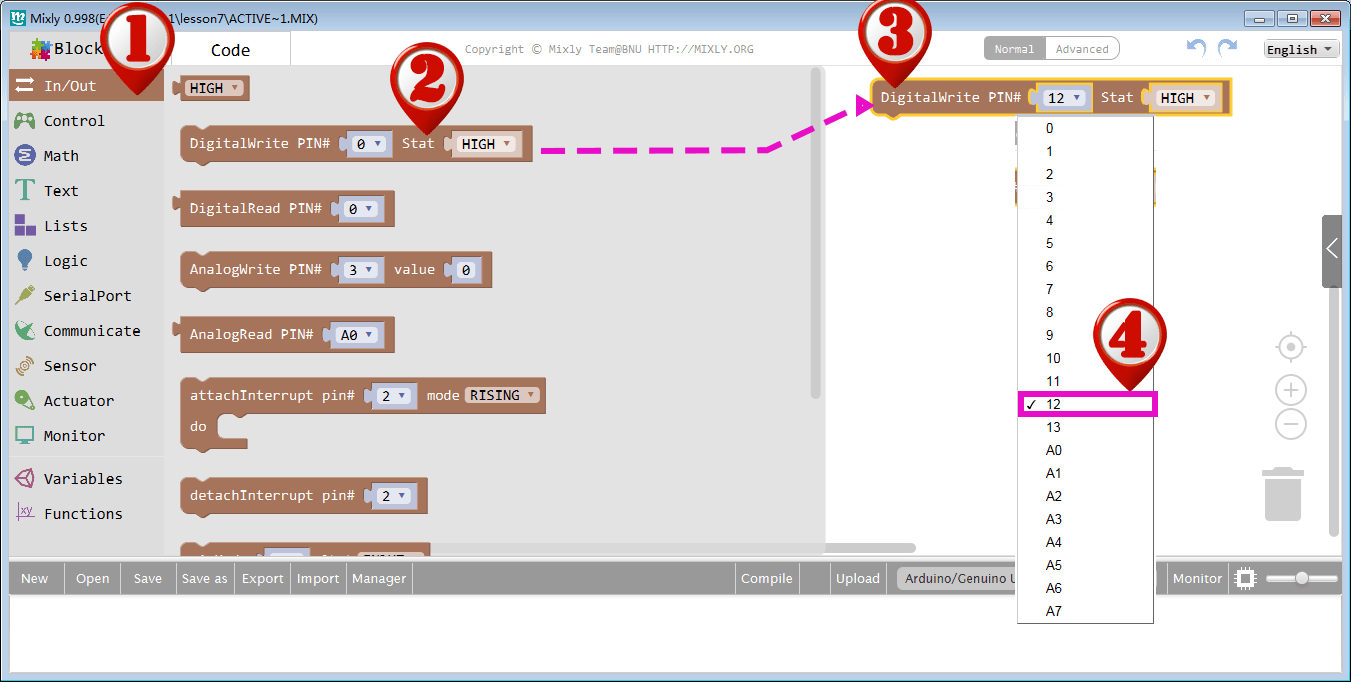 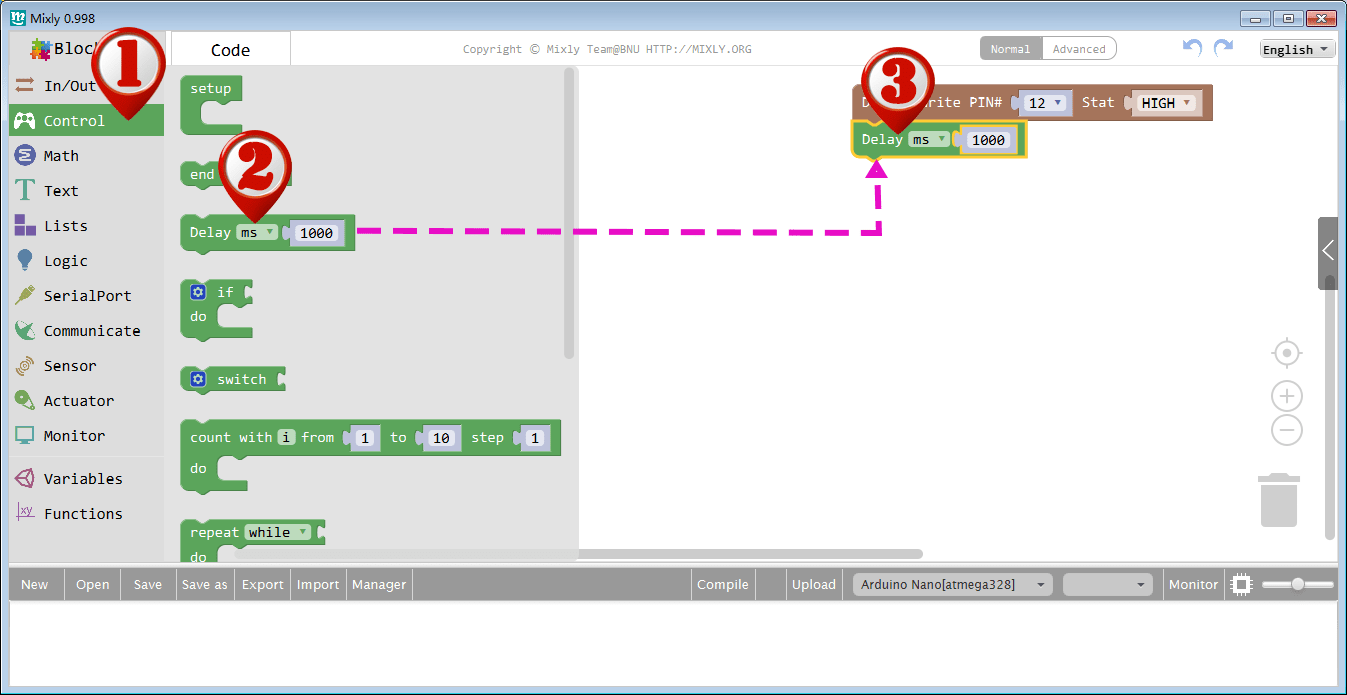 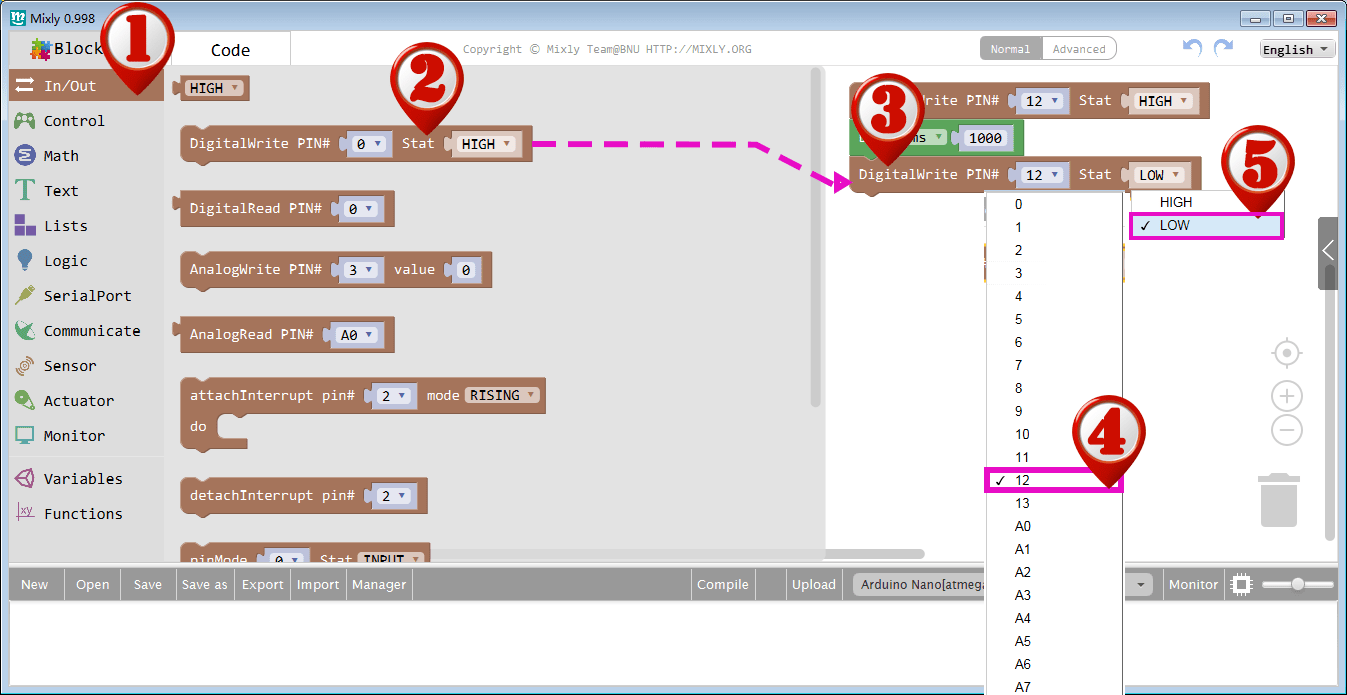 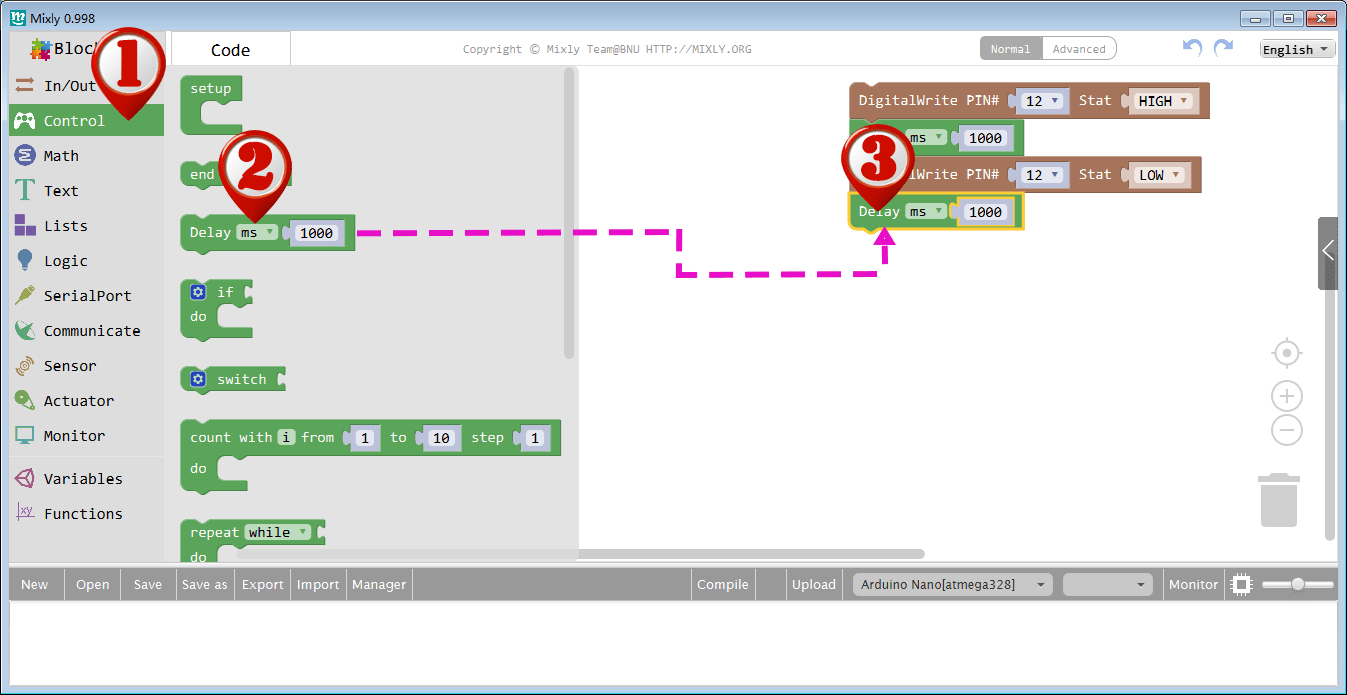 This program will give a high or low level to the buzzer connected pin 12 to turn it on and off. After programming, you can click the “<" button to check the corresponding code on the right bar. 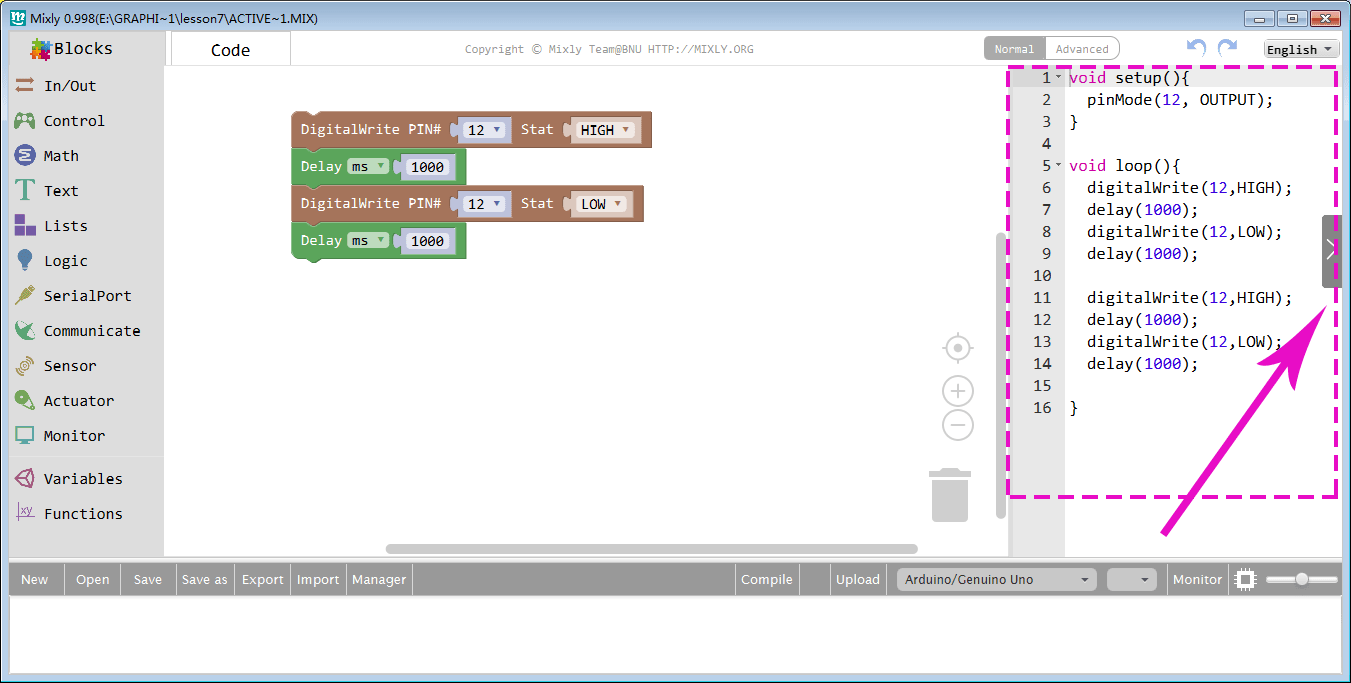 (3) Select the serial device of the OSOYOO Basic Board for Arduino from the COM menu. 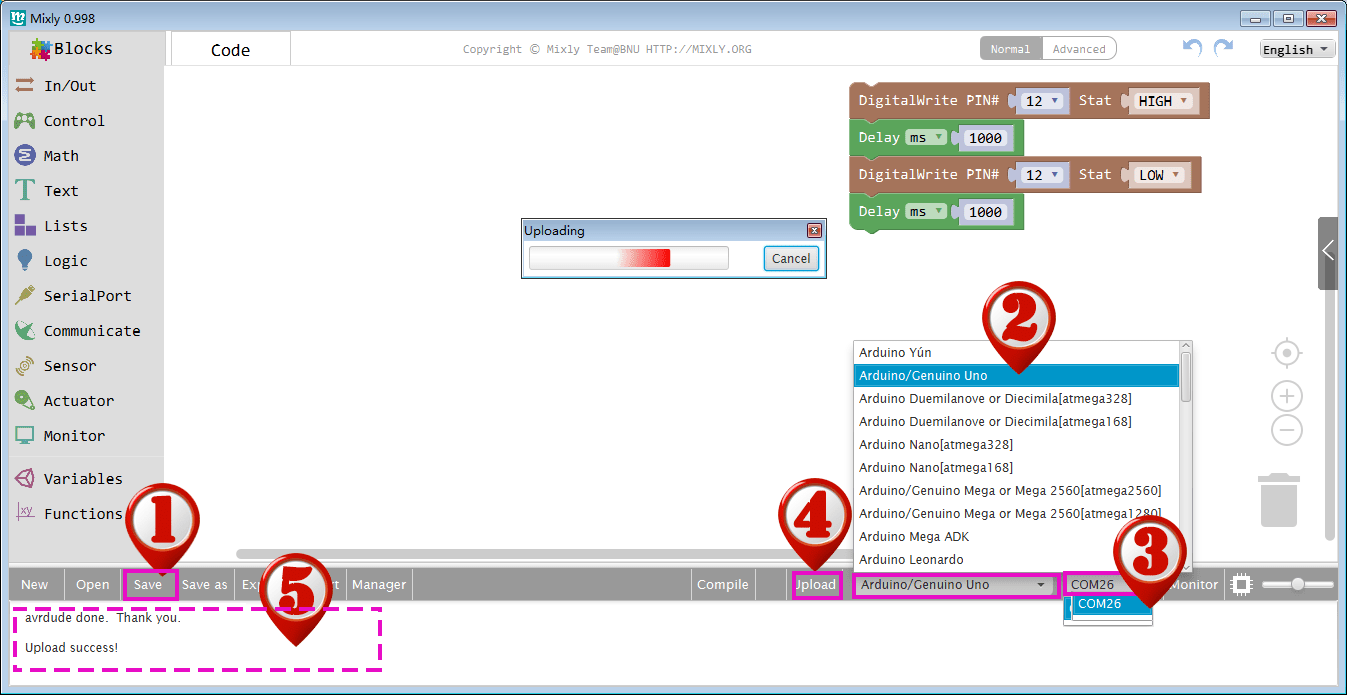 A few seconds after the upload finishes, you should hear the buzzer beep.

The active buzzer has built-in oscillating source, so it will beep as long as it is electrified, but it can only beep with a fixed frequency.